In Dellys a few years ago, local writer A. Chabani was kind enough to show me the following manuscript page, all that was left of a larger work: 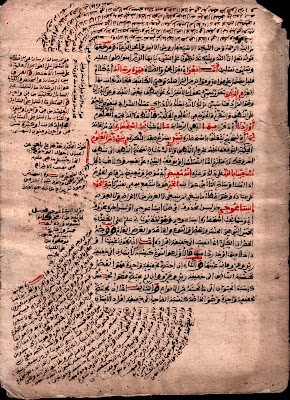 The two-layered commentary struck me, of course – the red is the original text, the black is the commentary, and the margins seem to be commentary on the commentary – but what really got my attention was the curious word إيساغوجي īsāghūjī, prominently displayed in the middle right-hand side. It looked like a Greek word, but I had never heard it before – and what was a Greek word doing in an Arabic manuscript from a little town in Algeria, which could hardly be older than the 18th century?

A closer look at the page confirmed my guess about the word’s origin: it says:

Actually, eisagōgē (Εἰσαγωγή) in Greek means "introduction". But those five words should ring a bell for any philosophers reading this; they relate to Aristotelian logic, which indeed appears to be the topic of the work from which this page is taken. So how is it that some religious scholar from pre-colonial Dellys came to be studying Aristotelian logic?

It turns out that around 270 AD, in the heyday of the Roman Empire, a Neoplatonist philosopher from Lebanon named Porphyry wrote, in Greek, a little introduction to Aristotelian logic, and gave it the title Eisagogē. This work became a standard textbook of logic both in the Middle East and (via Boethius' Latin translation) in Europe. It was translated into Syriac in the 5th century, and from Syriac into Arabic in the 9th. It thus became an important reference point for the study of logic among Arabic speakers; Averroës was only the most famous of dozens who wrote commentaries on it. In fact, the particular commentary in this picture is apparently not online, and I haven't been able to identify it; if some reader happens to be familiar with it, let me know!

The study of Aristotelian logic became part of the curriculum in Algeria, as elsewhere, and continued at least into the 20th century in the zaouias; its influence is obvious in such works as al-Sanūsī's creed. There was some controversy over its validity, however, as Ibn Khaldun points out.

Very interesting post, thanks! I have a few commentaries on the Isagoge and this one does not match any of them.

However, I did hear that there were various Arabic introductions to mantiq titled ايساغوجي but that the most popular one by far was that of Athir al-Din al-Abhari, which was studied across the Islamic world (and still is studied). I can confirm that based on the matn in this image, it is that of Al-Abhari.

Thanks for the identification! I'll have to have a look at al-Abhari's work sometime.