Tasmanian reborn (or not...)

Interesting story on Tasmanian today... The last speaker of a Tasmanian language died in 1905 (Wikipedia), and little material survives, so I'm not entirely confident in the historical reliablity of the newly announced reconstruction, especially since:

"There were thought to be a dozen or more Aboriginal languages in Tasmania and even more dialects. The language program has produced an amalgam of the languages."

Hmm. Do you speak European?

I'm not convinced that that "many within the Aboriginal community could speak palawa kani fluently" either. Still, it's worth a try. An interesting case of conlanging and language revitalization combining.
Posted by Lameen Souag الأمين سواق at 9:18 PM 5 comments:

And as long as I'm comparing pronouns, it seems only fair to note that not all languages have nice stable uncomplicated pronouns like Beja. Japanese is an obvious counterexample, but Prentiss Riddle and Macvaysia point out an egregious case in Malay... (noticed thanks to Language Hat.) I was especially struck by the "distinct set reserved just for addressing ethnic Chinese" - if I'm not mistaken, those are clear borrowings from Hokkien Chinese (where "I" is goá, "you" is lí.)
Posted by Lameen Souag الأمين سواق at 9:05 PM 5 comments:

Some interesting news this week from the Beja, an ethnic group of the Red Sea coast of Sudan and Egypt. It's unclear whether this rebellion is representative of the Beja's general feelings or just a figleaf for Eritrean intervention (or both), but it's a story to watch - and an excuse to bring up a cool language.

Beja is Afro-Asiatic* - either part of Cushitic or a separate branch, depending on who you ask - and happens to be among the most obviously similar languages to Semitic and to Berber. The noun morphology is already fairly suggestive:

(Beja, apparently, has no third person suffixes.) However, what really clinches it is the verbal system. Beja has two principal classes of verbs: one that often takes prefixes, and one that usually just takes suffixes. In Semitic, the prefixes are used for the imperfect, and the suffixes developed from a stative (still to be seen in Akkadian) into a perfect; Berber mostly retains the prefixes, whereas only minor traces of the suffixes remain. The prefixes are especially telling:

while the suffixes are best exemplified in Beja in the conditional mood:

It's really remarkable, considering all this, that Afro-Asiatic research isn't more advanced. There are two etymological dictionaries out there, admittedly - Ehret's and Orel and Stolbova's - but, though valuable, they frequently disagree with each other, and neither has attained general acceptance.

* Some people think Afro-Asiatic is not proved. I can't think why. Omotic's membership is not entirely clear, but all the rest is just plain obvious.

Writing Wolof (or rather وَلَفْ) 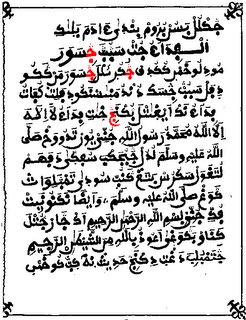 With apologies for the long hiatus in my postings, I would like to present another topic in West African writing: the surprisingly formalized tradition of writing Wolof, the main language of Senegal, in Arabic script. Wolof is also written in Latin script, I should note, which you can see copious examples of in the pedagogical materials on this Gambian Peace Corps site, but the Arabic script is much more widely known, especially in rural areas, although French is far more widely used for writing than Wolof in any script.

Myself, I only went to Dakar, so books in Wolof of any sort were relatively hard to come by. However, Arabic bookstalls, while rarer than the French ones, weren't hard to find (they had a predominantly religious focus, but a number of literary, scientific, and historical works), and, while most of their works were in Arabic, they had a couple of Wolof religious texts in a rather nice Arabic script, of which I enclose a scan. I was going to retype some, but even a cursory effort revealed serious issues. For instance, there is a Unicode letter for the common West African vowel sign that indicates short e (a dot under the letter, smaller than dots that form part of the letter) - the charts say it's 065C - but I can't find a font that will display it; and another common letter which seems to indicate ny or nj, jiim (ج) with three extra dots on top, isn't in Unicode at all. Apart from those, the main differences with standard Arabic seem to be:

PS: You can find a font that will display some of these letters at PakType; however, their selection is more adapted for Sindhi (which has the largest Arabic-based alphabet I know of) than for West Africa.

PPS: Apparently, the latest version of PakType can display all these after all; see comments...
Posted by Lameen Souag الأمين سواق at 8:45 PM 4 comments:

Most English speakers are familiar with the phenomenon of r-dropping; it divides the English-speaking world into Ireland, Scotland, and most of America (where r is kept throughout), and England, Wales, Australia, New Zealand, and the American South and New England (where r is lost after vowels.) Despite this broad distribution, r-dropping somehow seems emblematic of British English, so I was naively surprised to observe it in other languages; yet the same sound-change happens to be observable in Tarifit, the Berber dialect of northeastern Morocco, and seemingly in Korandje, a Songhai language brought from Timbuktu to a northern Saharan oasis, Tabelbala, along the trade route to Sijilmasa in Morocco. Some examples:

I wonder what other cases are out there?

Leafing through a book on the early days of Rastafarianism, I came across the word "blin'ty" in an interview with someone speaking Jamaican patois. Blin'ty? Is that some kind of Russian pastry? Apparently not.

It seems that Rastas have developed some rather interesting ways of reflecting their beliefs in their speech. Usages like "I an' I" are well-known, but less widespread are avoidance terms where the opposite of a word is substituted. The people of the city, from a Rasta perspective, are "Babylon"; they don't see the truth, so why should the word "city" contain the sound of "see"? (In a Jamaican pronunciation, anyway...) Rather, they substitute the more appropriate syllable "blind"...
Posted by Lameen Souag الأمين سواق at 3:10 AM 2 comments: