Thank you very much for your responses, everybody! (If you haven't answered yet and want to, please do it before reading the rest of this post.)

Chomsky's intuitions were as follows (* marks ungrammaticality as usual):Mine were that 1, 4, 5, 7, and (only after some thought) 6 were good, while 2 and 3 were wrong - but I exclude those judgements here, since I was reading the book and might have been swayed by my reactions to the arguments. My sister found 1, 2, and 4 wrong, 3 "weird but comprehensible", and 5-7 good - so even within a single family judgements vary significantly. Your 11 collective judgements (plus some friends and family, and excluding non-native speakers) add up as follows (grading "uncertain" as 0.5): 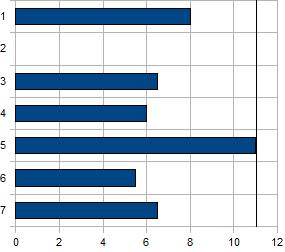 The discrepancy, and the level of individual variation, are striking - not a single reader agrees with all of Chomsky's judgements, and the only consistent judgements are 2 (always wrong) and 5 (always right.) Most of Chomsky's judgements also happen to be predicted by his (and others in the generative tradition's) theories; your judgements therefore often pose problems for those. According to Chomsky, 1 and 2 should both be ungrammatical for the same reason - they involve movement past more than one "barrier" (boundary of a 'noun phrase' (DP) or clause excluding the complementiser (IP)) at a time. Yet more than half the people here (including me) accept 1, while nobody accepts 2; one could argue that 2 should be less acceptable than 1 because it crosses three barriers rather than two, but why should 1 be acceptable at all? 4 should be ungrammatical because "why" is occupying a position that "which book" should have to move through - but about half of you (including me) think it's fine. And most readers of this blog find 7 to be better than 6 - the opposite of Chomsky's judgements and of the predictions of the "A-over-A" principle he was working with then (although the latter is obsolete.)

Chomsky (1963:51) said of sentences like these: "In some unknown way, the speaker of English devises the principles of [wh-movement etc.] on the basis of data available to him; still more mysterious, however, is the fact that he knows under what formal conditions these principles are applicable... The sentences of [1-3] are as 'unfamiliar' as the vast majority of those that we encounter in daily life, yet we know intuitively, without instruction or awareness, how they are to be treated by the system of grammatical rules which we have mastered." This seems to be false; individually we often find it difficult to decide the grammaticality of sentences like these, and collectively we routinely disagree on them. Certainly it cannot be construed as belonging to that part of the "knowledge of language" that is, in the words of Chomsky (1963:64), "independent of intelligence and of wide variations in individual experience".

If it did, then that would be rather interesting: it has been claimed that the principles of Subjacency must be innate, because children aren't exposed to enough evidence to deduce them otherwise. But given the level of variation actually observed, it is tempting to reverse the reasoning: children don't deduce most of the principles of Subjacency, so they must neither be exposed to enough evidence for them nor have innate knowledge of them. Rather than postulating arbitrary rules hard-wired into the brain and specific to the language faculty, a more promising way to explain Subjacency phenomena might be to try to derive them from processing difficulties, as suggested by Sag et al.
Posted by Lameen Souag الأمين سواق at 11:39 PM 9 comments:

I've been reading an old Chomsky book, Language and Mind, lately. As usual, the moment he starts discussing what would eventually be called subjacency I find my intuitions are systematically different from his, and I'm curious: how common is this? By way of testing, here's a few sentences in English: which ones would you consider ungrammatical/unacceptable as phrased?Chomsky's grammaticality judgements will be provided later - they're on pp. 50-54 of the book.
Posted by Lameen Souag الأمين سواق at 10:23 AM 18 comments:

A major collection of early Tashelhiyt manuscripts from the 16th century onwards has gone online: Manuscrits arabes et berbères du Fonds Roux. It includes a copy of al-Hilali's Berber-Arabic lexicon. The Lmuhub Ulaḥbib library of Bejaia has also put a number of works online, including an 18th/19th century manuscript on theology in Kabyle: العقيدة السنوسية. Both collections are also of interest for their many Arabic books, but the Berber ones are particularly significant due to the serious paucity of materials for the study of precolonial Berber writing traditions.
Posted by Lameen Souag الأمين سواق at 1:06 AM 2 comments:

I shouldn't really be blogging at this stage of my thesis-writing, but this I had to share: the World Loanword Database has come online. Vocabularies likely to be of particular interest include Tarifiyt, Hausa, Kanuri, Iraqw, but there are plenty more, all carefully analysed for loanwords... Have fun, and feel free to discuss any mistakes you think you spot in it here :)