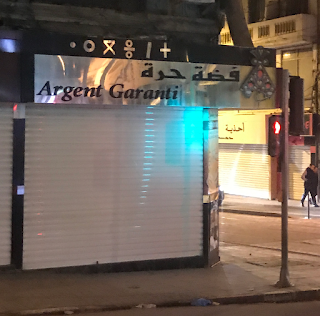 Jerusalem stands out among Arab cities today not only culturally and religiously, but morphologically as well. In Modern Standard Arabic, the city of Jerusalem is al-Quds القدس, and the gentilic suffix is -ī (properly -iyy), but "Jerusalemite" is Maqdisī مقدسي rather than the expected *Qudsī (though the latter is attested as a personal name). As a general cross-linguistic rule of thumb, morphological irregularities are most likely with older, more basic words. Yet this type of irregularity is rather unusual, even among the region's oldest and most prominent cities: Dimashq (Damascus) yields Dimashqī (Damascene), Baghdād yields Baghdādī, Makkah (Mecca) yields Makkī... How did it arise?

It turns out that, in the early Muslim era, it was formed in a perfectly regular way. In his masterwork, the medieval geographer Al-Maqdisī (d. 991) calls his hometown Bayt al-Maqdis بيت المقدس ("house of holiness"), a title now largely supplanted by al-Quds ("the holy"). It survives to the present in certain religious contexts or as a poetic synonym, not only in Arabic but in Kabyle Berber as well: H. Genevois ("Croyances") notes a traditional popular belief that the souls of the dead gather in Bit Elmeqdes, corresponding exactly to Al-Maqdisī's boast that Jerusalem is "the site of the Day of Judgement, and from it is the Resurrection, and to it is the Gathering" (عرصة القيامة ومنها النشر وإليها الحشر).

A quick search of Alwaraq's heritage library suggests that the shorter name "al-Quds" became popular around the period of the Crusades, when Jerusalem was as much a subject of dispute as now. The earliest attestation I can spot on a cursory search (excluding a work falsely attributed to al-Wāqidī) is a mention by the Andalusi traveller Ibn Jubayr (1185), who notes that "between [Kerak] and al-Quds is a day's march or so, and it is the best location in Palestine" (بينه وبين القدس مسيرة يوم أو اشف قليلاً، وهو سرارة أرض فلسطين). Very likely a longer search would yield slightly older attestations. By the time of the next major Palestinian writer I notice in the collection - Al-Ṣafadī (d. 1363) - al-Quds had clearly become the unmarked term for the town; it recurs constantly in his work.

The name Bayt al-Maqdis was thus replaced in practice by the shorter and catchier name al-Quds a good 800 years ago, yet the corresponding gentilic continues to preserve the older name. Since 1967, the Israeli government has imposed a third name as its official term for the city in Arabic: Ūrshalīm, a transcription of the Syriac name used in Christian liturgical contexts which provoked "furious ridicule" from residents (Segev 2007:492). Since this usage remains entirely unknown to most Arabic speakers, it is unlikely to have much impact on Arabic usage. Yet the timing of the shift from Bayt al-Maqdis to al-Quds reminds us that political upheaval impacts placenames as well as people's lives.

Tifinagh and place of articulation

The order of the Latin alphabet we use is a matter of historical chance; if it ever made sense, the reasons behind it were lost millennia ago. Many other writing systems, however, have tried to order their letters in a less arbitrary fashion. The most prominent successes for this approach are found in and around India, where scripts are usually ordered by place of articulation - ie, by how far back in the mouth they are pronounced - as in Devanagari: a..., ka ga kha gha ŋa, ca cha ja jha ña, ṭa ṭha ḍa ḍha ṇa... (After a couple of sound changes, this order ultimately also yields that of the Japanese kana: a, ka, sa (< ca), ta na, ha (< pa) ma, ya ra wa n.) In Arabic, the normal order of letters reflects a partial reordering by shape rather than by sound (thus ب ت ث are all grouped together, whereas in the older order they were far apart from one another). However, for technical purposes such as traditional phonetics and Qur'an recitation, one occasionally also finds the place-of-articulation order: indeed, the earliest Arabic dictionary (Kitāb al-`Ayn) used it (ع ح هـ خ غ ق ك ج ش ض ص س ز ط ت د ظ ذ ث ر ل ن ف ب م و ي ا ء).

Tifinagh, the traditional script of the Tuareg people of the Sahara, seems not to have any established traditional ordering. However, if you organize its letters by place of articulation, an obvious pattern emerges:

This table represents Tifinagh as used at Imi-n-Taborăq in Mali, as recorded by Elghamis (2011:64-65). (Note that w is a labio-velar sound; for obvious reasons, I've chosen to place it in the velar column rather than the labial one. Also, the letter put in the laryngeal plosive slot actually just indicates the presence of a final vowel, although there are reasons to suspect that it once represented a glottal stop.) There is a lot of regional variation in Tifinagh, but one thing stands out: in every variety, everything on the right side of the thick line - ie, everything velar or further back - is consistently formed exclusively out of dots, except for g - and even that is often composed of a combination of dots and lines. Throughout much of Tuareg, original g tends to be palatalized to ǵ [ɟ], and some dialects - like this one - have lost the distinction altogether.

How this distribution emerged is unclear for the moment. It is noteworthy, however, that dot letters did not exist in Tifinagh's ancestor, Libyco-Berber as used in the pre-Roman and early Roman periods (with rare, doubtful exceptions). Two of the dot letters have clear Libyco-Berber origins; ⴾ (k, three dots in a triangle) was originally ⥤ (k, a rightwards open arrow), while : (w) was originally =. Based on these two alone, one might suppose a sort of regular form shift of = to :, in which case the development might simply be coincidental. ⵗ (ɣ) may derive from the rarely attested ÷, whose value (q?) is speculative, while ... (x) is simply a rotation of ɣ. :: (q) had no Libyco-Berber equivalent, and is perhaps historically a visual "ligature" of ɣ and + (t) - the word-final cluster *ɣt becomes qq in Tuareg. The final vowel sign · might derive from classical ☰, which had the same function; alternatively, one might derive it from or the dot occasionally used to separate words, and suppose that classical ☰ actually yielded ⵂ (h), in which case the extra dot needs to be explained.

It's not impossible that Tifinagh users at some stage made a conscious link between back consonants and dots. But even if the distribution is just a coincidence, it should still be useful for anyone seeking to memorise the script.