Tigre between ejectives and pharyngealization

There is some debate over the original pronunciation of the "emphatic" consonants (Arabic ط ض ظ ص ق) in Semitic and more generally in Afroasiatic: were they ejective as in Amharic, or pharyngealized/uvular as in Arabic? For a number of reasons, such as that in proto-Semitic they did not show a voicing contrast, the general opinion is that they were glottalized. Yet pharyngealized consonants show up not just in Arabic and neo-Aramaic but even in Berber, which would on the face of it suggest that the feature predates proto-Semitic. Either we have to suppose independent parallel development, or we must assume that Berber ejectives turned into pharyngealized consonants under the influence of Arabic. The latter seems more probable, but only if we can show that it is indeed plausible for a language to make such a change as a result of widespread bilingualism in Arabic.

It turns out that Tigre, the main language of northern Eritrea, offers a concrete example of just that. The inland plateau dialect of the Mansa`, commonly considered as standard, is described by Raz (1983) as having four ejectives k' (usually [ʔ]), t', s', and č̣ , and no pharyngealized or uvular consonants. You can hear an example of standard Tigre here, which seems consistent with his description. The coastal Hirgigo dialect spoken around Massawa, however - as heard in these Learn Tigre YouTube videos, however, show a rather different situation. ḳ is simply [q] (as in "elbow", "neck", "thigh"), ṭ is [tˤ] (as in "goat"), ṣ is [sˤ] (as in "white", "black", "back"); only for č̣ can you occasionally hear a slightly ejective realization [tʃ] ~ [tʃ'] (as in "fingers" or "fingernails"). The result is a good deal easier for an Arabic speaker to pronounce! This should not be too surprising: the port of Massawa has had extensive contact with Arabic speakers for many centuries. In fact, it's said to be the place where some of the first Muslims, seeking refuge from the persecution they were suffering in Mecca, landed on their way to the Abyssinian court. Such a diversity of emphatic consonant realizations within a single language confirms in turn that it is plausible for the habit of pharyngealizing emphatic consonants to be transferred from a language to its neighbors.

I've been reading two novels in Arabic lately. Frankenstein in Baghdad, by Ahmad Saadawi, reimagines Baghdad's descent into chaos in the mid-2000s, blending gritty realism with semi-allegorical horror. Samraweet, by Hajji Jaber, is an altogether gentler but still cutting narrative of the Eritrean diaspora, interleaving scenes from the narrator's life in Jeddah with ones from his first visit to Asmara as he gradually realizes the difficulty of being part of either place. Both turned out to share a feature I hadn't been expecting to find: dialogue in other Semitic languages.

In Frankenstein in Baghdad, one of the main characters is an elderly Assyrian woman, Elishawa "Umm Daniel". All her relatives have long since moved abroad, and keep begging her to come live with them where it's safe, so there are few occasions for her to speak anything but Arabic. However, the Assyrians of northern Iraq traditionally speak a variety of Neo-Aramaic, and when she meets her grandson from Melbourne, they have the following fairly elementary conversation (pp. 276-277), which I hope I've transcribed correctly:

The author of the book seems to be from southern Iraq, so I found it remarkable that he took the trouble to get some Neo-Aramaic dialogue - especially since the copula is appropriately put in the feminine form both times (in Assyrian Neo-Aramaic, even the 1st person singular copula agrees in gender). Probably he felt it would enhance her symbolic status as a reminder of what Iraq once was. Unfortunately, while Aramaic has been spoken in Iraq for almost three millennia, its prospects there are dim: after all these years of war and frequently persecution, most speakers live in Western cities, and unless they're exceptionally good at remaining a distinct, cohesive immigrant group, their descendants seem more likely to speak English or Swedish than Aramaic.

In Eritrea, unlike Iraq, most people have as their first language a Semitic language other than Arabic: Tigre in the north, Tigrinya in the south. So it was less surprising to find an Asmaran waiter on the first page saying "سنّي ما سيام" (?Senni mā syām), which I assume from context means something like "Good afternoon!" However, the occasional glimpses provided into Eritrean sociolinguistics were more eye-opening. The narrator and most of his friends are from a Tigre-speaking background and know how to speak it, but Tigre per se seems to play little part in their linguistic identity. They grew up not only speaking Arabic in the street, but feeling that Arabic is an Eritrean national language, and resenting the government's treatment of it as less central than Tigrinya. When an Eritrean in Jeddah speaks Tigre with him, the narrator assumes it's because he only arrived recently until he finds out, to his surprise, that this person simply "enjoys speaking it, even in Jeddah" (p. 76). It would be interesting to see how this compares to the attitudes of Tigre speakers living in Eritrea: between the prestige of Arabic and the status of Tigrinya, what are the long-term prospects for Tigre?

Of words and pens

In Algerian Arabic, this is a stilu ستيلو - a word instantly recognizable as a borrowing from French stylo:

In Standard Arabic, on the other hand, as any Algerian learns in primary school, it's a qalam قَلَمٌ. This, as it happens, may also be a borrowing, though a much older one; compare ancient Greek kálamos κάλαμος "reed, reed-pen", which apparently has an Indo-European etymology. Clearly, either pre-modern Algerians were so sunk in illiteracy as to have forgotten the word for a pen altogether, or they replaced a pre-existing word for pen with a French borrowing - right?

Well, no. In the Middle Ages, there weren't too many fountain pens or biros around. Classical Arabic qalam referred to something more like these: 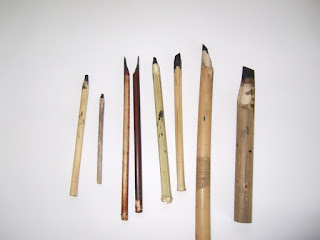 Any Algerian who went to Qur'anic school up to the 1960s or so will remember this - a simple reed pen anyone can make using nothing more complicated than a sharp knife. (The Algerian version was a bit different than those in the picture, as it happens - usually people would use a quarter-circumference of a large reed, not the whole circumference of a small one.) More than that, they will remember what it's called: qləm قلم. There are probably people in Algeria who still use these, and very likely they still call them that.

But no one calls a modern industrial pen qləm. When industrial pens were introduced, sometime in the 19th century, ordinary Algerians ended up classing them as a new object, quite distinct from the reed pen despite its similar function, and deserving of an unrelated name. The guardians of Standard Arabic, on the other hand, decided to extend the reference of qalam to cover both. It may be no coincidence that French distinguishes calame from stylo, like Algerian Arabic, whereas English, like Standard Arabic, treats both as diferent types of pen.

Historical linguists regularly use lexical reconstruction to shed light on technological history, an approach called "Wörter und Sachen". This approach has been very fruitful in many cases. But, as this case illustrates, there are some pitfalls to watch out for: whether something counts as the same object or as a new one is a rather culture-bound question, and if investigators impose their own ideas about this on the situation they are investigating, they will get the wrong answer.