According to Glottolog, the least documented language in Algeria is neither Korandje nor some Berber variety, but rather one that might not immediately leap to mind: Algerian Sign Language. If you have some idea of what to look for, though, there turns out to be a lot more available than might be expected; here's a brief bibliography gleaned from online: And - perhaps more usefully - a brief videography: Let's round this off with a school: Of course, one obvious question remains open: is there really just one sign language in Algeria?
Posted by Lameen Souag الأمين سواق at 12:39 PM 3 comments:

I really don't have the time to post these days, but I couldn't resist letting you all know about a strong contender for the most ridiculous language-related controversy I've ever seen: the Moroccan baghrir scandal. "Baghrir" بغرير, as North Africans will know, is a kind of delicious pancake typically served with honey. A recent Moroccan primary school textbook incorporates (presumably for the first time) a picture of this regional delicacy, captioned with its name: الْبَغْرِيرُ. Pretty banal, right? 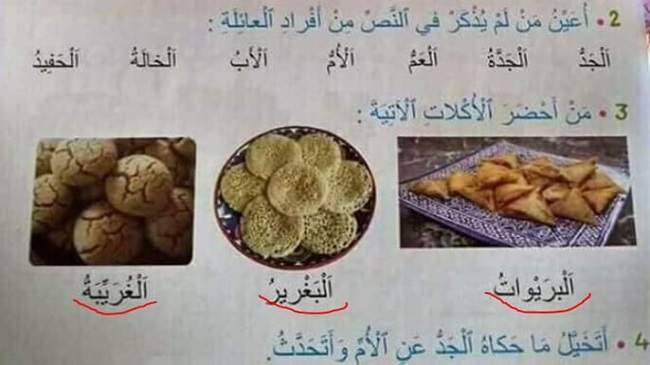 Apparently not. A furore erupted on social and traditional media, as ordinary people and self-styled experts lined up to lambast the Ministry of Education for this shocking betrayal of the Arabic language. Fouad Bouali of the National Coalition for the Arabic Language fulminated: "Citizens don't need "baghrir" or "slou" in their school texts... "The use of folk expressions in school texts caps the tendency towards dialectalization". Prof. Mohamed Nabil Esrifi of Ibn Tofail University wrote a letter to the head of government:


In shock, a shock whose bitterness I share with millions of Moroccan citizens, at the insertion of "popular Darija" expressions in approved school texts, which has spoiled our appetite for our favourite dishes such as "briwat" and "baghrir" and "ghribia", and raised our blood pressure and body temperature... I address you this letter to put an end to the rise in idleness and neglect of the career of a whole generation, the dissolution of educational content, and the stultification of the act of education."

Naturally, some took a more sensible view, such as Dr. Mohsen Akramine:


"We cannot reject a group of names that we commonly use in our social life on a regular basis, such as "briwat bellouz" and "baghrir" and "ghribia". so what problem does the term "baghrir" create in nurturing learning in class?... We cannot restrict the Arabic language to the language of "the lion and the blade" [two archaic terms are used, but English is rather poor in synonyms for "lion"]; the Arabic language cannot remain stuck in the classroom and the lecture hall, completely isolated from our daily business."

As far as I can see, none of the shocked citizens complaining about this has ventured to suggest an acceptable Standard Arabic synonym for "baghrir".  Nor have they ever objected to the word's routine presence in cookbooks - which, along with schoolbooks and religious texts, are basically what keep most North African bookshops alive.  So is the idea simply that this impure term must be kept out of the sacred space of the classroom, or what?  My mind is boggled - or, as they say in Algeria, مُخّك يحبس.
Posted by Lameen Souag الأمين سواق at 10:36 PM 3 comments: