In 2019, a new alphabet was invented for Songhay, joining a long list of West African script creation efforts from the 19th century onwards. It may sink without a trace like Garay, or (less probably) it may enjoy a success comparable to that of N'Ko; even in the former case, however, it may be of interest as a case study in script creation. I will therefore summarize what little I know about it below.

According to this page, the script was invented by Ibn Achour Ousmane Touré in 2019, based on livestock marks used by Songhay villages, towns, and regions. He intended it to allow Songhay speakers to write in their own language rather than in French or Arabic, and thus to enable them to continue and progress, following in the footsteps of the Songhay Empire, which he supposes must have had its own writing system at some point. (Songhay is, of course, sometimes written - officially in a Latin-based orthography, unofficially also in Ajami Arabic - but is frequently not thought of as a written language; the primary target of education is literacy in French and/or Arabic, and most locally available printed materials are in one of these languages.) A volunteer committee was set up to promote the script, including the inventor himself, Dr. Imirana Seydou Maiga (secretary), M. Housseiny Ibrahima Maiga (expert advisor), and M. Faissal Kada Maiga (general coordinator and secretary of information). This group seems to use Arabic as their primary language of wider communication, and consists at least in part of Songhay diaspora in the Arab world; the secretary and coordinator seem to have spent time in Saudi Arabia, and the latter is reported to be based in Libya. One might speculate that the script offered them a "third way" to get past the French-Arabic binary.

The alphabet is as follows: 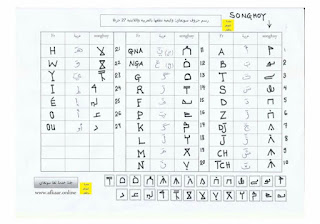 A series of YouTube videos, and posts on Afkaar.Online, clarify the orthography. The writing direction is right to left, and the alphabetic order is obviously inspired in large part by Arabic; there is no capitalization. The diacritics are explained here (titled Hantum maasayan "adding diacritics to writing"): 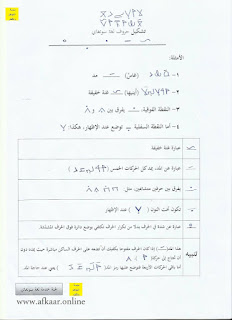 Vowel length is marked with a macron over the vowel, and vowel nasalization by a tilde (both betraying the influence of a Latin-based transcription); if placed over a consonant rather than a vowel, these respectively indicate that the consonant should be followed by aa or ã. (In this sense, if not in the more usual one, the script has a default vowel a.) In principle, all other vowels are marked plene (though short a occasionally seems to be omitted). Consonant gemination is indicated by a circle over the consonant. The dot under the letter n is dropped when it assimilates to a following consonant (Arabic ikhfā'), a feature inspired by Quranic orthography. (The text above gives an example of final dotless n with a tilde over it at the end of maasayan; this combination is not explained as far as I can see.) Besides this, dots distinguish affricates (dot above) from palatoalveolar sibilants (dot below), and d and g (no dot) from z and ŋ (dot above). The letter for ñ is close to being a graphic hybrid of ŋ and j, appropriately enough.

The system is completed by a set of numerals, using place notation (titled Soŋay-k(a)buyaŋo "Songhay counting"): 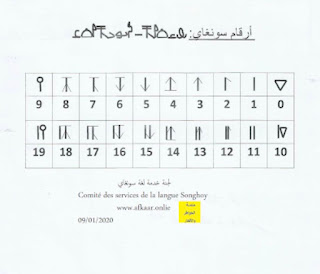 Punctuation evidently includes hyphens, used somewhat inconsistently at morpheme boundaries (thus the nominalizing suffix -yan/-yaŋ is not hyphenated in the two previous examples, but is hyphenated in denden-yaŋ "learning"), but fairly consistently in compounds (e.g., in the same post, Soŋay-senni m(a) duuma "may the Songhay language last"). Until examples of longer texts are available, little else can be said about punctuation.

If further data becomes available, I will update this post; if you know of any, comments are welcome! Particular thanks to "Oudi" for indispensable clarifications.