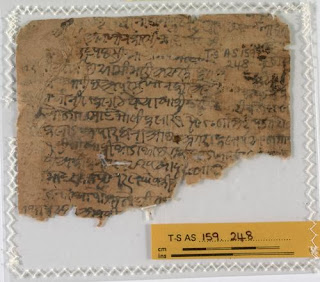 Email ThisBlogThis!Share to TwitterShare to FacebookShare to Pinterest
Labels: Indic

Can it even be transliterated? The letter shapes seem wrong, but there are an awful lot of Indic scripts.

This is pretty standard handwritten Devanagari. In fact it looks almost modern to me - I'd be surprised if it actually came from the 11th century - the 1890s seems a lot more likely. Wish the picture was a little bigger so I could make out more than a few of the letters.

Ok,I'm reasonably certain that I can make out the word 'maalsaa' after the digits 21 and the word 'abhaari', on the fifth line of the verso of the fragment. That means 'goods' in Hindi, which perhaps lends weight to the idea of it being a trading document. My Hindi is rather limited and I don't know the word 'abhaari', but apparently it can mean 'indebted', but not sure if that's the right reading.

If you click on the link below the image, you can see a bigger version...

Yep, still a bit small for my eyes. Btw, I got the 'goods' bit wrong too - it's just 'maal' that means goods (which I really should have known, since Nepali has the same word). But that seems like a plausible reading in any case.

Unfortunately, I don't know Gujarati but this is definitely pre-modern Gujarati script, probably from around the 16th-18th centuries, before it crystallised into its modern form by reincorporating formal features of Devanagari — though with the inherent variability of handwriting I can't date it any more closely. The letter shapes and the use of a ruled cross-page headline from which the letters "hang" as of on a clothesline are consistent with what we see in Gujarati annotations in Avestan scriptures from the same time period.

The broken ‹l› લ of Gujarati (and Kaithi to the east) and the diagnostically western (Gujarati-Modi-Sourashtrian) ‹b› બ both still have an initial tick at top left, the remnant of the original headstroke integral to individual early Devanagari letters/akshara.

Interestingly enough, there is some variation in the forms of certain letters that could point to more than one person's hand in a single text: ‹a›, which is mostly written in the archaic shape similar to its Devanagari antecedent, a પ preceded by three horizontal dashes, but also shows up in the fifth line with its modern અ shape formed by cursively joining the three dashes together and to the main body of the letter; and ‹n›, which shows up both in a shape similar to the archaising standard modern ન and a shape beginning with a large loop that then curls clockwise to the top of the line before descending on the right. The ‹t› seems to consistently have the older, looser shape: a large horizontal curl rising to top right, then descending into the stem. The ‹k› shows a typical variant of the early "curvy Z" shape intermediate between the parent Devanagari क and the reanalysed "crossed S" ક shape of modern Gujarati script.

I think it could belong to Kachchi traders who ruled the seas between Aden , Mogadishu and ports in Gulf of Kutch.

Thanks kiwehtin! Can you recommend any references on pre-modern Gujarati?

I don't know of any references on premodern Gujarati as such — there may be some in Gujarati or Hindi — but both languages are inaccessible to me, unfortunately. The best online source I know of for documents with older Gujarati script as it developed out of Devanagari is the Avestan Digital Archive (http://www.avesta-archive.com/), containing numerous manuscripts of Avestan scriptures from Indian, Iranian and European archives in which annotations in Devanagari and early varieties of Gujarati script can be found.

Some of my own work uploaded to http://independent.academia.edu/ChristopherRayMiller contains incidental references to these earlier script varieties, but only as evidence for earlier forms of Gujarati handwriting that eventually developed into several scripts of Indonesia and the Philippines. I have several samples in the table on page 21 of this conference presentation:

Since the scripts I deal with don't use letters for retroflexes or aspirated consonants (or several other sounds specific to Sanskrit and other North Indian languages), I only compare the Devanagari and early Gujarati counterparts for the letters they actually use.

Several letter shapes that distinguish early (and later) Gujarati from Kaithi and members of the mercantile (Mahajani-Baniauti-Vaniai-Sarrafi) shorthand script group are the double-bowled ‹b› બ, the specific reversed '3' + tail shape of standalone ‹i› ઈ, the ‹j› with initial loop જ as opposed to the "lazy S" shape of Kaithi, which is nearly identical to modern Gujarati retroflex ‹ɭ› ળ, and the '2'-shaped ‹r› ર, where Kaithi uses a sloped upward line apparently related to the Devanagari ‹-r› conjunct on initial clusters, e.g. ‹pr› प्र.

For an upcoming paper in Writing Systems Research I put together a table (only to appear online, not in the paper itself) comparing the consonant letters of Devanagari, three stages of Gujarati, Kaithi, the mercantile scripts, Modi, and the two known Sourashtra scripts of South India:

Modi and the Sourashtran scripts both appear to share more features with Gujarati script than with Kaithi and the mercantile scripts further east, but unlike Gujarati, they form a southern group where there is a marked tendency not seen elsewhere both to join the body of letters to the stem at the bottom rather than the top, and a general tendency to use excescent loops where one stroke segment joins at another at an angle.

Thanks - that's a pretty extensive answer!

This is definitely not from Kerala. The language and script is completely different in the South of India.