Book out: Berber and Arabic in Siwa (Egypt) 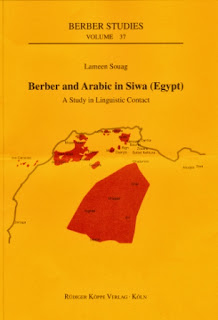 I am very happy to announce here (a couple of days late) that my book Berber and Arabic in Siwa (Egypt) has now come out. The oasis of Siwa in Egypt, already famous in Classical times for its Oracle of Ammon, is by far the easternmost place where Berber is spoken. As a result of its isolation from the rest of Berber, and of a history that includes significant immigration and language shift, the Berber variety spoken there is highly distinctive (and not mutually comprehensible with Moroccan or Algerian Berber). On the one hand, some of the most persistent quirks of Berber grammar have been substantially simplified; on the other, even highly irregular core Berber morphology has been retained, and massive influence from Arabic – including the borrowing of productive root-pattern morphology – has generated new complexities. Based on part of my doctoral thesis but significantly expanded, this book:

Thanks once again to everyone who helped in this process, and especially my friends in Siwa. To all those who find this sort of thing interesting, I hope the book comes in handy!

Why is "(Egypt)" in the title? Wikipedia knows no other Siwa that could conceivably be relevant to Arabic or Berber.

As for the "(Egypt)", in my experience a lot of people, even those well-versed in the "Western-Berber" languages, are not always particularly clear on the fact that there are still Berber languages alive in Libya and Egypt, let alone know what the name of the place where it is spoken is.

Congratulations dear Ameen, good work, a great Blog which I am following since years. أحسنت

Oh, I forgot last year to congratulate you for this highly anticipated book on Siwa. Congratulations! Alf mabrūk!
I hope to see you again soon.
Vincent