Why "Levantine" is Arabic, not Aramaic: Part 2

Last time, I promised to look at the "ratio of content ⊂ Arabic & ⊄ Aramaic". To do that, we need two things: data on the frequency of different words and morphemes, and etymologies for each word and morpheme. If this were English, I could offer you a 450-million-word online digital corpus for the former, and the OED for the latter. For Levantine Arabic the pickings are a bit scantier. There are indeed several digital corpora of Levantine Arabic, but none of them are publicly available, and none have published any frequency data that I can find offhand; and for etymologies, you have to consult, by hand, as many dictionaries (of several languages) as it takes.

So for present purposes, I will use a much smaller substitute, which can hardly be accused of any partiality to Standard Arabic: namely, a selection from Said Akl's Roomyo w Julyeet (CORRECTION: introduced by Said Akl), which I was lucky enough to run into at an Oxfam a few years ago. I picked a well-known section of the play whose language seemed relatively simple, with little or no visible Standard Arabic influence - the lines starting from "Romeo, Romeo, wherefore art thou Romeo?" (p. 62), including Romeo's reply and Juliet's reply to him (finishing on the second line of p. 63) - and counted morpheme frequencies (retaining his eccentric orthography). The 26 morphemes that occurred more than once account for about two-thirds of the selection, so looking at their etymologies gives us the maximum of information for the minimum of effort - and here they are. Only those that are unambiguously Arabic or unambiguously Aramaic are relevant to our purpose; the rest may be dismissed as "confounding factors":

So, out of these 26 items - which together account for 107 out of the 161 morphemes in this selection - 10 are unambiguously Arabic (accounting for 46 morphemes), and none are unambiguously Aramaic. 15 items (accounting for 91 of the morphemes) could equally well be Arabic or Aramaic, and as such are irrelevant to determining which one predominates within Lebanese Arabic. (If you decide to be really generous to Aramaic, you might shift -a, hu, and -t to the Aramaic column, accounting for a grand total of 6 morphemes versus Arabic's 46.) The remaining single item, the imperfect prefix b-, is a later innovation whose history is unclear; even if someone found an Aramaic etymology for it and added it to all the unlikely cases mentioned, the ratio of "content ⊂ Arabic & ⊄ Aramaic" to "content ⊂ Aramaic & ⊄ Arabic" for this list would still be about 3:1. On a less generous and more plausible calculation, it's infinite (46:0). Either way, by this criterion, too, Levantine is Arabic, not Aramaic.

If you pick a long enough text, of course, you will eventually find an Aramaic loan or two. There are quite a few Aramaic loans in Levantine Arabic, depending on the dialect, and they must really stand out to a Levantine speaker studying Aramaic. But even in the most heavily Aramaic-influenced dialects, they occur far less frequently than unambiguously Arabic forms. While historical linguists' usual definition of language origin does not rely on any explicit frequency criteria, in all the cases I've seen, the most frequent source of vocabulary by token count for a sufficiently large text turns out to be what historical linguists would consider as that language's parent. In Levantine Arabic the effect is even stronger, since not only is the basic vocabulary of Arabic origin, so is most of the learned vocabulary.

Now, after all those calculations, I'm sure you're eager to read the lovers' dialogue, so here it is:

And in the original orthography: 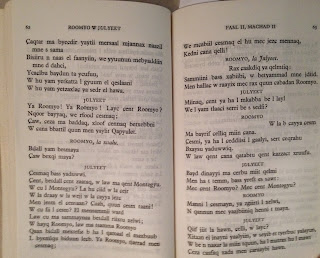 Arabic historical linguistics is very far from my area of expertise, but I was interested by this paper on the etymology of the imperfect indicative marker b-, which however you probably know already: Ahmad Al-Jallad, “The Etymology of the Indicative Augment b- in Some Neo-Arabic Dialects” in Charles Haberl (ed.), Proceedings of the 35th Annual Meeting of the North American Conference on Afroasiatic Linguistics (Cambridge: Cambridge Scholars Press, 2009).

According to Handbuch der arabischend Dialekte, b- is derived from baynā, baynamā = "while, just as". Apparently there is an intermediate form in Yemen, something along the lines of "bayn-aktub".

That would make a lot of sense - and the Yemeni form establishes that it's Arabic rather than Aramaic pretty conclusively. Thanks!

The b-indicative was used in the Qatabanic language of ancient Yemen. I have found no evidence to connect it to its use in Egypt and the Levant, but it seems as though there is a connection due to the fact that these areas were settled by Yemeni tribes.