Among the many responses to recent events in Algeria circulating on Facebook, a particularly linguistically interesting one caught my eye: 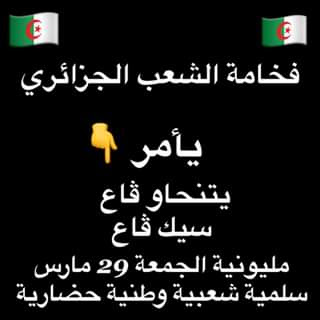 His Excellency the People
orders:
"Throw 'em all out!"
That means all!
Million Man March of Friday 29 March
Peaceful, Popular, National, Civilised

The first two lines and the last two are in Fusha (Standard Arabic); the two middle lines are very much in Darja ("dialectal" Algerian Arabic). The clash of registers produces an amusing effect. But even more striking is the first word of the fourth line: سيك sik. You'll search for it in vain in Arabic dictionaries, or even in Algerian Arabic dictionaries (they do exist) printed before, oh, 2000 or so; it's a word from French - well, in French it's three words - c'est que, literally "it is that..." In French, this structure is used to mark sentence focus. You can find examples of it being used that way in Algerian Arabic too, eg in Lotfi DK's "Aar alikoum": "المشكلة فهذ البشر سيك في راسهم كاين لحجر" [The problem with these people is that there are rocks in their heads]. But that's obviously not quite what's going on here, though. I haven't come across this construction often enough to have a good sense of all its uses, but it seems to be gaining new functions as it becomes integrated into the wider system of information structure marking in Darja.

It's interesting to see people (even me) using too naturally -let's say- a grammatical aspect of french when they speak daridja.